The Japanese and their History

We all went to Hiroshima yesterday, one of the highlights of the trip. From Kyoto, where we were staying, it is a 90 minute whiz in the fastest of their bullet trains, still an incredible experience. Kyoto itself is lovely: living as we do in Winchester, the old capital of England, I felt an immediate affinity with its Japanese equivalent (the actual similarities are pretty thin on the ground – it has over one million inhabitants and 1,600 Buddhist temples). Interestingly (given the previous post about the seeming lack of planning considerations here) Kyoto restricts the height of all buildings to that of the tallest shrine, which gives the city a more villagey feel despite its size. No ridiculous golf nets here.

Hiroshima is a bustling seaside city of similar size to Kyoto, with at least three big rivers running down into a big delta. It was an important centre for naval construction during the war, with a number of their great battleships built here. It was also an important embarkation point for the Army in their various twentieth century wars with China. However, it was not for that reason that the Allies chose it as a target for their new “Little Boy”(it was in fact one of a number of targets, all kept clear of the firebombing that afflicted so many other cities so that the effects of the bomb could be judged more accurately), rather it was a large population centre that could feel the shock effects of the bomb so that the leadership could belatedly smell the coffee and save the US from costly ground operations on the home islands. I have been reading Max Hastings’ excellent book Nemesis on the closing stages of the war, and he brings to life some of the extraordinary dilemmas facing the Allied leadership with the information and prejudices of the time, not those of subsequent generations, an important service a good historian can provide.

I must confess to being a little peeved by what the Japanese have made of the event. They have preserved the shattered remains of an export hall close to the detonation point, its dome starkly skeletal (pictured) and walls scorched with the heat of an atomic explosion. However, its new name Peace Dome gives away the use the Japanese have made of this awful legacy. The bomb seems to represent to the Japanese an opportunity to present themselves as the victims of something dreadful and existential, rather than the consequence of a war they started and then refused to end on terms other than those preserving their leadership (and, bizarrely, much of their new”found” colonies), thus condemning their people to further suffering, whether by A blast or invasion.

In place of any public utterance about the awfulness of the carnivorous military regime that reaped what it sowed (recent history as taught in schools is “quite blurred” on the subject, according to one local I chatted to, which is in stark contrast to the efforts the Germans have made to reconcile themselves to their past), there are pious exhortations at the bomb memorial for world peace, and on the walls copies of stern letters written by the Mayor to countries testing nuclear devices. It is pretty damn rich. I presume someone was as assiduous writing letters of condolence to all those civilians they raped, bayoneted and experimented on. Or maybe not.

It has been such a pity to end the trip with the sour taste of Japanese chutzpah in my mouth. In so many ways Japan has been a joy: its scenery truly wonderful, its cities vibrant, its people delightful. However, the shame I sensed below the surface that acts as such a powerful force for compliance also seems to have prevented them from fully digesting the events of the last century. Far from being a war crime (which is strongly implied by the museum at Hiroshima), the detonation on 6th August 1945 was the essential midwife that delivered the modern democracy we see in Japan today. Maybe they know it, but just aren’t saying. But until they do, I will. 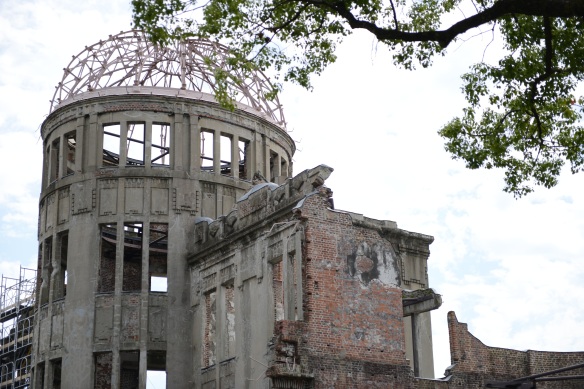 From: Japan
← The Japanese and their Environment
The Balearic Crossword →
No comments yet